Got a Mouldy Air Conditioner? Here’s How to Fix it Safely 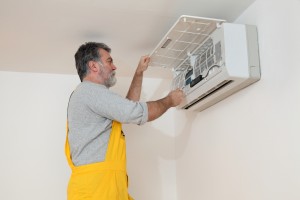 There’s nothing more crucial to good health than the food you eat, the water you drink and the air that you breathe. So, what if the air you’re breathing in on a day-to-day basis is contaminated? It’s a horrifying scenario, and one that’s a lot more common than you might think. Do you know if your Brisbane home or business is harbouring a mouldy air conditioner?

Every time you turn it on, it’s spewing mould spores and bacteria into the air, and your lungs. If so, you’re exposing yourself and the most vulnerable members of your family to a raft of potentially serious, even deadly health problems. A mouldy air conditioner is a recipe for chronic illness. You need to fix it fast.

Why should you worry about mould in your air conditioner

Not all moulds are created equal. Mould is a microscopic organism; a fungus. There are good and bad moulds. For example, your camembert or brie cheese relies on mould for its distinctive flavour and texture. And where would we be without the wonder-drug penicillin? It’s derived from a type of mould that scientist Alexander Fleming stumbled across. Unfortunately, the types of mould you might discover lurking in your air conditioning unit aren’t particularly friendly or useful ones. In fact, they’re much more likely to cause you harm than good.

Mould spores are the mechanism through which mould reproduces. When your air conditioning unit is at rest, it’s the perfect petri dish for a wayward mould spore to grow on. Once comfortably at home in your air conditioner, a mould spore will reproduce. Further spores will be released and become airborne. They’ll spread throughout your home, landing on your food, your clothes and you. And from there you’ll eat them and breathe them in. If you have an allergic sensitivity to mould, its presence in your air conditioner is likely to trigger a significant reaction. Likewise, if you have asthma or any other respiratory illness, mould is a risk factor that can put you in hospital.

Some moulds are also thought to be responsible for the production of mycotoxins, a leading contributor to serious and life-threatening illnesses such as pneumonia, particularly in children, the elderly and the immune-supressed.

Other reasons why a mouldy air conditioner is a nightmare

Mould, when left long enough, can also cause significant problems that will affect the efficiency of your air conditioner. In some instances, a build-up of mould can even lead to blockages within the air conditioning drains. The end result can be an expensive and inconvenient breakdown when you need your cooling system the most.

Signs of mould in your air conditioner

Chances are you might not see any visible signs of mould to start with. The first sign you might have of a mouldy air conditioner is a musty or funky smell when it’s in operation. If you’ve eliminated all other potential suspects as the source of the smell, you need to turn your attention to your air conditioner.

Once a mould colony is established you might notice tell-tale black or grey circular marks (mould deposits) on the interior surfaces of your air conditioner. Worse still, you might see evidence of mould spreading to your walls and ceiling.

You should inspect your air conditioning ducts and inside the unit itself for visible signs of mould. Mould can also be located on the air conditioning coil, the drain and on the fan itself.

If you suspect you’ve got a mould problem, you can also arrange for professional testing to confirm its presence and what type of mould it is. This can be done via a spore count. It’s effectively an audit of the number of airborne mould spores and the collection of a sample for laboratory analysis.

Tips and tricks for fixing a mouldy air conditioner

If you’re going to tackle the problem of a mouldy air conditioner yourself, you need to take steps to ensure that you protect yourself by wearing appropriate coverage. You should always wear gloves and a face shield or filter mask rated to protect you from mould spores. Proper cleaning of an air conditioner involves dislodging the mould spores.

Your first step is to dismantle the unit in accordance with your owner’s manual. You will then need to vacuum the interior of the unit thoroughly and remove and wash the filters under running water. The vacuum should take care of any loose or airborne mould spores within the unit.

Use warm, soapy water to wipe down all surfaces of the air conditioner before allowing them to dry thoroughly. You should then go over them again with a commercial air conditioner cleaner and apply a mould-inhibitor. You can do this with a clean, damp cloth. Some of the best mould inhibitors are actually naturally-derived products including:

The jury is out on whether bleach is an effective mould-killer as there are some schools of thought that it merely bleaches the mould, rendering it invisible to the naked eye, as opposed to killing it. Bleach also generates powerful fumes that can adversely affect your health.

Once you’re done, you should discard any mould-contaminated cloths in an airtight plastic bag.

What NOT to do if your air conditioner is mouldy

A strategically sprayed air freshener, scented candle or diffuser is only a band-aid solution to the problem of a mouldy air conditioner. It will only temporarily mask the odour caused by the mould. You need to eliminate the mould and the smell will go with it.

You shouldn’t use generalised anti-mould sprays either, because they contain a toxic cocktail of chemicals. They’ll inevitably get into your air conditioning system and from there, become airborne. You, your family or pets will inhale the fumes and can suffer adverse health consequences as a result.

Other chemical cleaners on the market are caustic or corrosive and can actually cause long term damage to the inner workings of your air conditioner, shortening its lifespan and leaving you vulnerable to breakdowns. That’s why you should only ever use a product designed for air conditioners. Otherwise, you might void your warranty.

Preventing mould in your air conditioner

Once you have mould in your air conditioning system it can be extremely difficult to remove. For that very reason, you should do everything possible to try and prevent the mould from taking hold.

At the very least, you should do this every 12 months or even more regularly if possible. The best time to do so is after the winter months, when temperatures and humidity start to rise again. That way, your air conditioner will be ready to go as soon as you need it.

Your regular program of preventative maintenance includes checking and clearing your air conditioning ducts for debris and organic matter. The interior of your air conditioner should not have any standing or stagnating water because moisture is the key to mould thriving. If you notice that your air conditioning unit has any significant areas of moisture build up, particularly when it’s not running, there might be a bigger problem that can be addressed by getting your unit serviced by a professional air conditioning technician.

Knowing when to call a professional

Accessibility can be problematic without the right tools and equipment. And that’s where we come in. If you suspect that you have a mouldy air conditioner, we can arrange a thorough inspection of your system to confirm the presence. We’ll happily discuss your options for treatment and removal of the mould in a fast and environmentally friendly manner.

That said, preventing mould in the first place is essential. You can do this by having your air conditioner thoroughly serviced and cleaned on an annual basis by an air conditioning specialist. At H & H Air Conditioning, we offer a comprehensive, proactive air conditioning service . We’ll stop a potential mould problem in its tracks, before it has a chance to take hold.